I purchased a story from Michael McBride for Cemetery Dance, I wrote a very positive review of his novel Remains, and I’ve enjoyed several other works of his, most notably Bloodletting. So it’s probably no great surprise to learn that I found much to like in his collection Quiet, Keeps to Himself, from Thunderstorm Books. 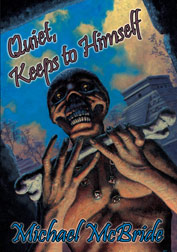 The book gathers eight stories, including three novellas, two ultra-short pieces, and three works of “intermediate” length. The first of the novellas, “Xibalba,” appears for the first time here, and it’s a dynamite page-turner focusing, as many of McBride’s works do, on a scientific expedition. The group is investigating a phenomenon known as “blue holes” — a geologic formation caused by long-term erosion and resulting in underwater caves or sinkholes, named for the dramatic contrast between the dark blue, deep waters of their depths and the lighter blue of the shallows around them. The expedition is composed of an interesting cast of characters, with a simmering back-ground romance, is situated in a suitably remote jungle area on the Yucatan Peninsula, and begins to get very creepy when a scuba diver exploring the cave system starts seeing furtive movements in the shadows from the corner of his eye. From there, the plot rapidly accelerates into full-on terror territory.

“The Calm Before the Swarm” is another original novella, and it’s a grim view of terrorists developing a deadly mutant wasp species. Narrated from the perspective of a doctor at the Center for Disease Control, the tale is impressively dark, utterly bleak, and to McBride’s credit he makes the threat seem chillingly plausible. The third novella, “Zero,” was previously published in a stand-alone limited edition by Necessary Evil Publications, and it’s another horrific tale with a strong science-fiction overtones, focusing on Brian Niemand, a recent graduate who’s initially thrilled to garner a coveted spot on a bioengineering research team, but later gets caught in the middle of a darkly twisted misuse of the technology.

McBride’s story from Cemetery Dance, “It Rips,” is included here, and it’s a taut little exercise in ratcheting tension, even if it provides far more questions than answers. As the author says in his story notes: “I’m still not quite sure what it really is, but I had a blast writing all around it.” “Postpartum” and “The Generosity of Strangers” are likewise very strong stories; on the other hand, I seldom have an appreciation for flash fiction, and the two examples included here do nothing to change that general impression. But those two micro-works are the only disappointments I found in these pages.

The collection comes complete with an introduction by Gene O’Neill, informative story notes from McBride, and typically excellent artwork by Steve Gilberts, all of which serve to make this an even more attractive package. Definitely recommended.

One thought on “Loud and Proud — Michael McBride’s collection Quiet, Keeps to Himself”