, a first novel from Matt Hults published by relative newcomer Books of the Dead Press, is blessed with some highly complimentary blurbs from some well-known authors. For example, try these on for size:

-“a crackling, creepy tale. A fast-paced read with a generous body count, Husk will make your skin crawl.” – Scott Nicholson

“Remember the first time you read Joe Lansdale’s The Drive-In, or Freezer Burn? Remember how exhilarated you felt as you tore through the pages…? Miss that feeling of being completely at the mercy of a writer’s imagination and boundless energy for his subject? Fret no more, friends—you now have Matt Hults’s Husk….” – Gary A. Braunbeck 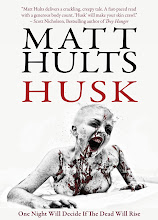 My desire to read Husk can be directly attributed to these blurbs, which, as you might imagine, whetted my appetite.  So did the book live up to its advance billing?  Well,early returns were not good…  Although the book hits the ground running, with action picking up literally from page one, the flurry is occasionally stalled by some awkward passages. For example:

“Muzzle flashes lit up the room, creating a crowd of black shadows that danced on the walls like a cheering crowd of demonic spectators. Frank collapsed to the floor, jaw clenched in a rigor of pain.”

“The Killer drove into a dirt parking lot at the middle of a forest clearing, braking to a stop before an abandoned church. The silence that followed after shutting off the engine became a mute testament to the remoteness of the location. Despite the solitude, the Killer slid out of the van and cast a wary gaze toward the church.”

There are also several unabashedly over-the-top scenes — such as when serial killer Kale Kane is finally mortally wounded after shrugging off numerous bullet wounds, or later in the book when a supernatural entity repeatedly displays its ability to animate objects, including coats, cars and trash — and a disconcerting number of typos.  But still…

There’s nonetheless a lot of energy here, propelling the story forward despite its occasional faults, and the breakneck pacing makes for a story that’s ultimately compulsively readable. Hults brings to life a full palette of characters, and while none of them are truly compelling, none stand out as cliches or stereotypes, either. Instead, they fall somewhere in between the two extremes, qualifying as solid, multi-dimensional characters — such as former Detective Frank Atkins, who suffered physical and psychological damage at the hands of Kane, but who battles to overcome his handicaps so that he can help Detective Melissa Humble track down the seeming copycat killer who has emerged several years after Kane’s capture.  Or recently-separated dad Paul Wiess and his children BJ and Mallory, the latter of whom possesses certain traits that make her extremely desirable to the killer.

To sum it up, Husk seems like a comic book without pictures — or a graphic novel without graphics, if you prefer.  Not that that’s necessarily a bad thing.  In fact, I could be wrong, but I wouldn’t be at all surprised if Hults would take that description as a compliment.  I can’t recommend Husk across the board, but if you’re a reader who values pacing and action above all else, it’s likely that you’ll enjoy this high-speed ride.

Gary Fry’s The Abolisher of Roses is the second title from the UK chapbook publisher Spectral Press. Fry is known for his publishing and editing work (as a co-owner of Gray Friar Press) but also increasingly for his fiction, which includes the collection Sanity and Other Delusions and the novel The House of Canted Steps, both put out by PS Publishing. This 7000+ word story provides an up-close and personal look at the marriage of Peter and Patricia, a couple who’ve invested three decades into establishing their personal patterns and rhythms, but seemingly not put much time into the joint union of their marriage — especially in the case of Peter, a self-centered and self-indulgent man who has a mistress on the side and tends to view his wife as more of a accoutrement than a partner.

As the story begins, Peter is making a show of humoring his wife’s latest interest, namely that of the art world, where she’s not only developed an appreciation but also shown some skill of her own, garnering a spot in a special exhibition that’s to be held in a unique outdoor setting, along a forest path. As they’re setting up her part of the exhibit, when Peter is not busy belittling his wife’s efforts, he’s questioning the value and meaning of the work of other artists in the show. When a petulant Peter finally storms off into the woods, he expects his wife to follow close behind, replete with apologies. But when she doesn’t follow, he ventures deeper in the woods, where he stumbles across some of the other art exhibits — and they’re decidedly strange,and strangely personal, exhibits at that.

The tale is certainly well-written and ably demonstrates that Fry is capable of some very good work, but at the end of the day, the characters are not exactly likable, and the point of the story is not exactly clear. Those judgments actually sound harsher than I intend…but I was left feeling vaguely dissatisfied by this tale, even as it made me want to search out more of the author’s work.